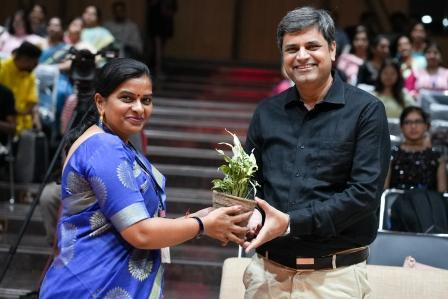 Sport or sports are all forms of usually competitive physical activity or games which, through casual or organised participation, aim to use, maintain or improve physical ability and skills while providing enjoyment to participants, and in some cases, entertainment for spectators. Usually the contest or game is between two sides, each attempting to exceed the other. Some sports allow a tie game; others provide tie-breaking methods, to ensure one winner and one loser.

Krishna Public School brightened its campus with lots of beautiful dance performances in the recently held event “Kaushal Mahotsav Fusion”, where students from different age groups from 5 to 19 and above participated in National Dance Competition. Around 140 students participated in Kaushal Mahotsav Fusion in Semi classical, western, bollywood and folk dance within categories solo, duet and group.

The program inaugurated with a lighting lamp and greeting to all participants and parents along with judges. KPS Executive Director Mr. Ashutosh Tripathi, Principal Mrs. Priyanka Tripathi were the special guest of honour for this event. Renowned Finger Insect (Member of Tatting India) Mr. Shashank Vishwakarma, Classical Dancer and ICCR Panel Artist Ms. Shweta Naik and Chhattisgarh Representative in India for Hip Hop Dancing Mr. Ashish Deshmukh were present in the judgment panel.

The event concluded with prize distribution and group photographs of participants.

A number of such two-sided contests may be arranged in a tournament producing a champion. Many sports leagues make an annual champion by arranging games in a regular sports season, followed in some cases by playoffs. Hundreds of sports exist, from those between single contestants, through to those with hundreds of simultaneous participants, either in teams or competing as individuals. In certain sports such as racing, many contestants may compete, each against all with one winner.

Records of performance are often kept, and for popular sports, this information may be widely announced or reported in sport news. Sport is also a major source of entertainment for non-participants, with spectator sport drawing large crowds to sport venues, and reaching wider audiences through broadcasting. Sports betting is in some cases severely regulated, and in some cases is central to the sport.

According to A.T. Kearney, a consultancy, the global sporting industry is worth up to $620 billion as of 2013. The world’s most accessible and practised sport is running, while association football is its most popular spectator sport.